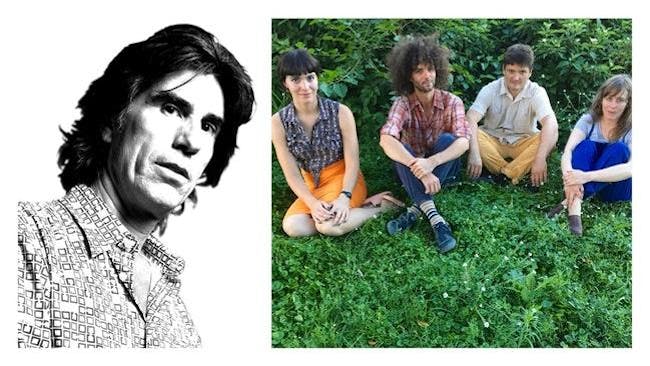 "His austere style inflects the astringent twang of The Velvet Underground with the drone of R.E.M." NEW YORK TIMES

"Salas-Humara writes his songs the same way a Zen master fashions koans, striving for simplicity while nonetheless being potent enough to send you reeling out into the mystic.” AUSTIN CHRONICLE

IE (pronounced “eee”) is a five-piece from Minneapolis devoted to experiences of hypnotic minimalism—sonic rituals from the future and ambient, desert soundscapes. Their shows feature sustained tones, electronic whirrs, slow beats, video and film projections, metaphysical recitations, and carefully crafted atmospheres. The transfixing quintet likes to jam, entering uninterrupted musical meditations that allow ideas to emerge and disappear like thoughts during a day. They then revisit those improvisations and extract the best themes, focusing on them until they become the centers of smoldering songs. The six pieces on Pome, their 2018 debut LP for the label Moon Glyph, are illuminated trances, tinkling percussion and twinkling keyboards and shimmering guitars tracing the shape of the horizon. Vocalists Mariel Oliveira and Crystal Myslajek enhance those textures, giving these wondrous soundscapes their own gravity.