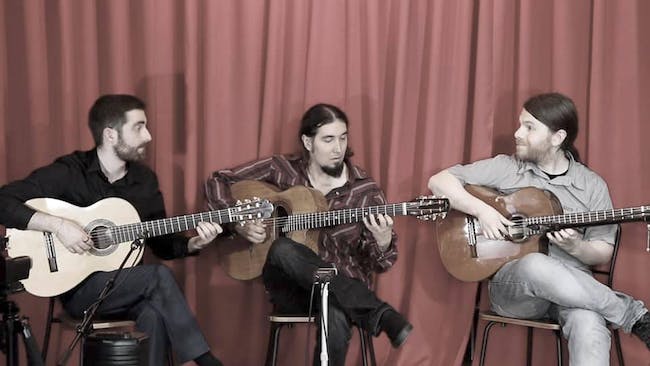 Join Ryan Picone, Ben Abrahamson, and Daniel Volovets for a diverse and exciting new program! This exciting performance will bring together each guitarist's unique aesthetic, as the trio will be playing everything from gypsy jazz, samba, Friday Night in San Francisco-era Paco de Lucia compositions, Disney tunes, originals, and everything in between.

Ryan Picone is a guitarist who earned his Master’s degree in music from Arizona State University. Shortly after, he studied at CSI Conservatory in Lugano, Switzerland where he received his Certificate of Completion in Music within a year. Ryan has been a music teacher for several years and strongly believes in music education. Throughout his musical career, he has given music-based lectures, performances, master classes, and demonstrations to help communicate the importance of music to his students.

Ben Abrahamson is a dynamic and original voice on the acoustic guitar. His original compositions and fingerstyle approach blend the improvisation of jazz with the dexterity of flamenco. His passion for flamenco guitar drove him to Taller de Músics School of Music in Barcelona, where he studied under Juan Ramón Caro. He has composed works for the Minneapolis Guitar Quartet, Zorongo Flamenco Dance Theatre, Mac Jazz big band, and Muhlenberg College Theatre and Dance Dept. Ben has shared the stage with mentors like Michael and Tony Hauser, Susana di Palma, La Conja, Chuscales, Pedro Cortes Jr., Joan Griffith, and Gary Lee Joyner. His debut fingerstyle record, "NEOLITHIC", comes out November 2019.

Daniel Volovets is a guitarist, composer, arranger, and instructor specializing in classical, flamenco, Latin American, and jazz music. Daniel began his studies at the age of 7 with the renowned Russian classical guitarist Anatoly Shapiro and subsequently studied with classical/flamenco guitarist Tony Hauser and legendary flamenco guitarist "El Payo" Humberto Wilkes. Daniel has recorded seven albums - Watercolors of the World (2008), Silhouette (2009), Rite of Passage (2011), Rainy Highway (2014), Wistful Tendrils (2015), Echoes of Love (2016), and the latest Masquerade (2019). He balances careers in medicine and music, now as a psychiatry resident at the Hennepin-Regions Psychiatry Training Program.