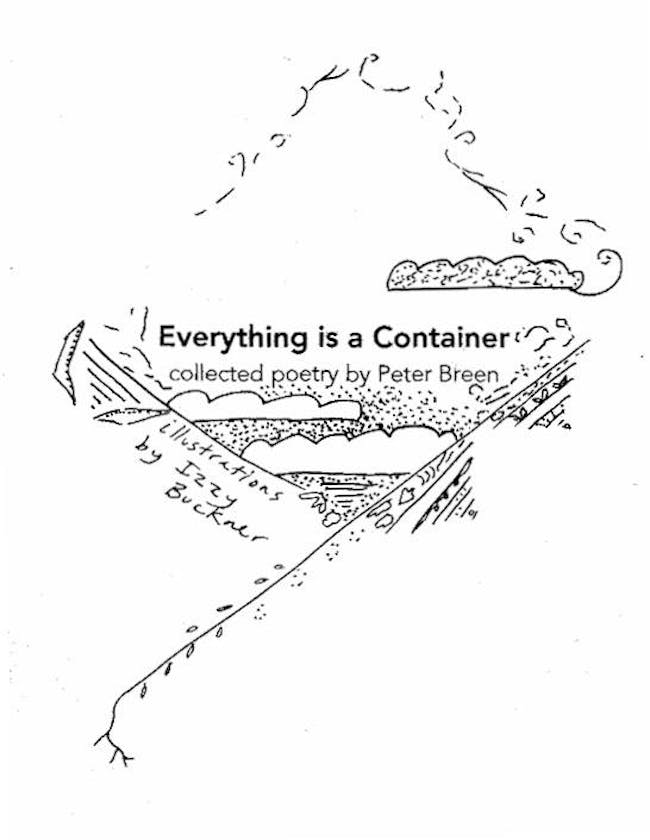 "Everything is a Container" is a booklet of poetry by Peter Breen with illustrations by Izzy Buckner.

"This is my first release of poetry. Usually when I release words, I release songs. Usually when writing words, I’ve tried to bend them into melodies and rhythms, build them into verses, choruses, and bridges. These poems started as the writings that defied musicification, or one could also say that these writings sounded best spoken, whether aloud or in a reader’s inner ear. As poems have started to gather, I have begun to embrace this other vein of creation.

I’m deeply grateful to work with Izzy on the publication of this text. Images weave in and out of the space and negative space created by the poems. They also brought a novel idea to the collaboration, having me (a highly uncomfortable visual artist) first sketch some ideas that I had on the pages before they went back and used the ideas present in my rudimentary scribbles to create illustrations with beautiful nuance."

This event will feature readings from the booklet alongside musical performances by Peter and Izzy aka Tuffy Red.

Peter Breen is a musician, writer, dancer and organizer in Minneapolis. Their main musical project is Still Unstill, an experimental songwriting focused rock band. Other musical projects include Willow Waters and the Earth Tones, Gabe Barnett and Them Rounders, and Witness as well as solo ambient works. This is their first writing publication since that time they had a poem published when they were in middle school.

Tuffy Red is the solo project of Izzy Buckner, who is also a founding member/songwriter of Ungrateful Little String Band, drummer of The Floofs, and involved in many other collaborations that rear their heads from time to time.

Tuffy writes snarky, honest, heartfelt, sometimes funny, sometimes vulnerable tunes addressing subjects including but not limited to gender nonconformity, non-monogamy, rape culture, fascism, and the difficulties and rewards of existing in relation to other human beings. Ya might get a tear, ya might get a chuckle, ya might enjoy their fingerpickin’ who knows?