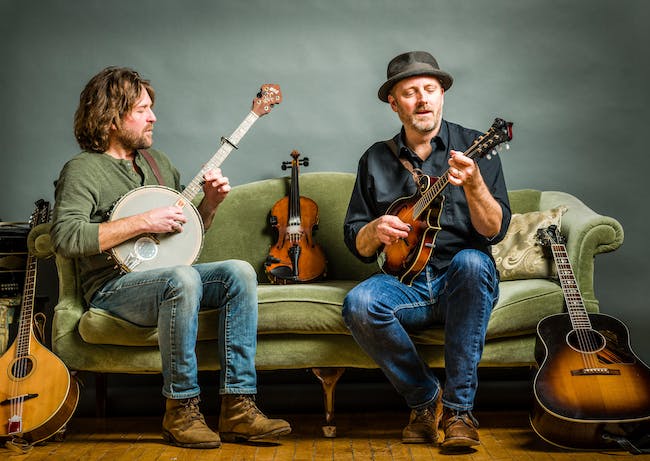 James Moors and Kort McCumber are an Americana duo that crafts beautiful story songs that walk the line between rootsy folk and melodic pop. The two songwriters met at the Rocky Mountain Folks Festival in 2005. Sitting around a campfire swapping songs, they each heard something in the music of the other that just fit. The two have been performing and writing together ever since. Having collectively sold more than 30,000 copies of independent releases from the stage, the duo has now released seven of their own full-length albums.

Based in Superior, Wisconsin, James Moors is heralded by Steve Morse, longtime Boston Globe writer, as “Sharing some of the same melodic gifts of Neil Finn, enhanced by a warm-hearted spirit that makes you want to hear more.”

A talented multi-instrumentalist, singer and songwriter, Colorado artist Kort McCumber plays a variety of instruments (guitar, banjo, cello, fiddle, accordion, mandolin, Irish bouzouki, piano, harmonica and more) in his own brand of Americana that is one part rock and blues, two parts country-bluegrass and all parts McCumber.

Although successful solo songwriters, Moors & McCumber discovered that their music together is more than the sum of the parts. Embracing a bigger sound than most duos, through the night's performance they will play acoustic guitar, mandolin, piano, ukulele, Irish bouzouki, fiddle, harmonica, cello, accordion and more... creating catchy melodies that are big, bright and electrifying to watch live. As Grammy award-winning producer Lloyd Maines says, “They bring it all to the stage and deliver in a big way.”