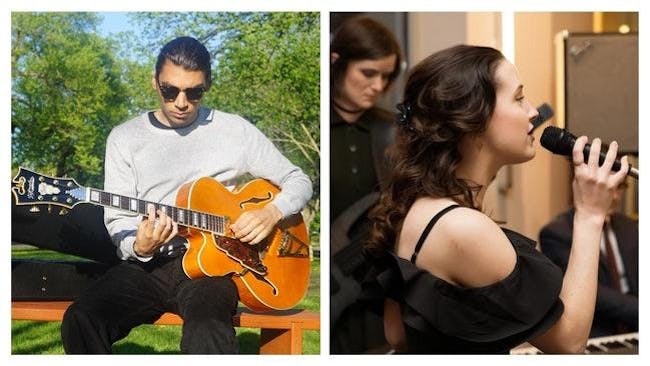 Julian Manzara is a guitarist, vocalist, composer, and bandleader. He studied at Berklee College of Music and has toured in both the US and Europe. This new solo performance will feature Julian singing and soloing on songs associated with the likes of Frank Sinatra, Chet Baker, and Antonio Carlos Jobim, while live looping technology allows for a full, textured sound!

Jiselle McCollam is a local singer and performer. She is originally from Bismarck, North Dakota but has called Minneapolis home for almost six years. Since graduating from the University of Minnesota she has formed her band, Jiselle McCollam's Jazz Cult, and performed in the Minnesota Fringe Festival. You can catch the Cult every first Friday of the Month at the Black Dog Cafe in Lowertown St. Paul.

Music has run in Sophia Myers Kelley’s family for at least the last three generations; it is therefore no surprise that she has taken the stage head on since birth. She is an actor, singer, and dancer who enjoys the life she breathes into music and the breath of life music gifts her. She was raised in St. Paul and is now a fresh and green 23 years old.

Her tone can vary from sultry gospel-y murmurs to flutey, poetic high trilling. Priding in her range from alto to coloratura soprano, Sophia is a tenacious force. She is influenced by Jazz, Folk, Gospel, Alternative, and Musicals, among many others. She has performed in Carnegie Hall with a choir, composed and performed personal music, choreographed dance pieces to music composed by fellow artists, and directed the dance choreography of the play, Trojan Women. The art form is not limiting for her. Sophia was recently featured in two songs with B'Success (thararebreed), local Hip Hop artist and member of the Steele family.